The Slate Belt has experienced a declining industrial base and a lack of investment in new economic sectors. Combined with significant job growth in adjoining areas of the Lehigh Valley, the Slate Belt has become more of a bedroom community without a strong jobs base. Meanwhile, broader region-wide trends show both housing and industrial development following the Route 33 corridor northward. These trends could have a significant impact on the economy, development pattern and quality of life of the Slate Belt.

Plan Slate Belt will need to examine what kind of economy local leaders and community members want to see for their region and develop strong policies and actions to guide sustainable growth and development.

An Economic Analysis was performed to better understand the local economic conditions. The analysis focused on two main elements: Location Quotient and Shift-Share Analysis. These two analyses were compared to the community’s perceptions of the local economy, additional data on the commuting habits of Slate Belt residents and recent development trends of neighboring areas.

The Location Quotient analysis measures the relative concentration of an industry in a given region by comparing employment in that industry to that of a larger reference area. In this analysis, employment by industry in the Slate Belt region is compared to Northampton County, the Lehigh Valley and the nation.

Industries with a high location quotient and high employment numbers have a greater local concentration of those jobs compared to the larger geographies. This may indicate areas of specialization or surplus.

A medium location quotient and medium employment numbers indicate that a sector employs a similar proportion of people. Medium scores tend not to indicate much unless some other analysis is showing a potential for growth or decline.

The location quotient is limited because it utilizes data from a static year, 2016, and thus only captures a specific moment in time. The Shift-Share Analysis following the Location Quotient section looks at changes in industry employment over a ten-year period.

The Location Quotient analysis for the Slate Belt shows a specialized economy, with concentrations of employment in certain blue collar industries, such as manufacturing, mining, farming and utilities. Several of these industries have a much higher concentration of employment in the Slate Belt than in the County or the Lehigh Valley as a whole, such as agriculture and mining, showing a local specialty within the region. Others are shown to be more concentrated than at the regional or national level, including utilities and waste management.

Manufacturing continues to be an important sector within the Slate Belt, with apparel, plastic and rubber, nonmetallic minerals and electronics all employing a higher number of people locally than at the regional or national level—even after many of these industries contracted in recent years. Industries that have experienced recent growth within the Lehigh Valley, such as transportation and non-store retailers (online shopping), are also significant local employers when compared to the national level, but not as concentrated as the Lehigh Valley as a whole.

Other areas are also far lower than their potential. Despite the beauty and history of the Slate Belt, tourism and museum employment is far below that of the region or the nation. Also, base services, such as food, retail, restaurants and even gasoline stations are far below the average level for Northampton County or nation—indicating that many locals are going outside the region to spend their money. These are potential local growth sectors if more can be done to build on local assets and encourage residents to spend money within the Slate Belt. 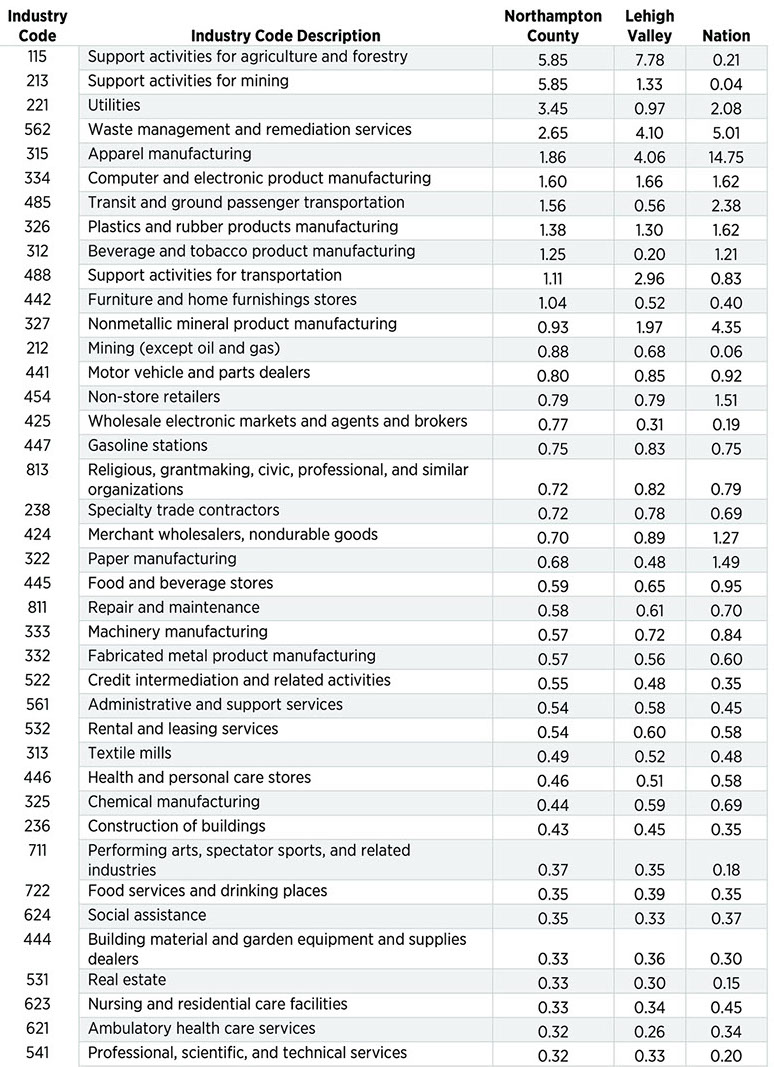 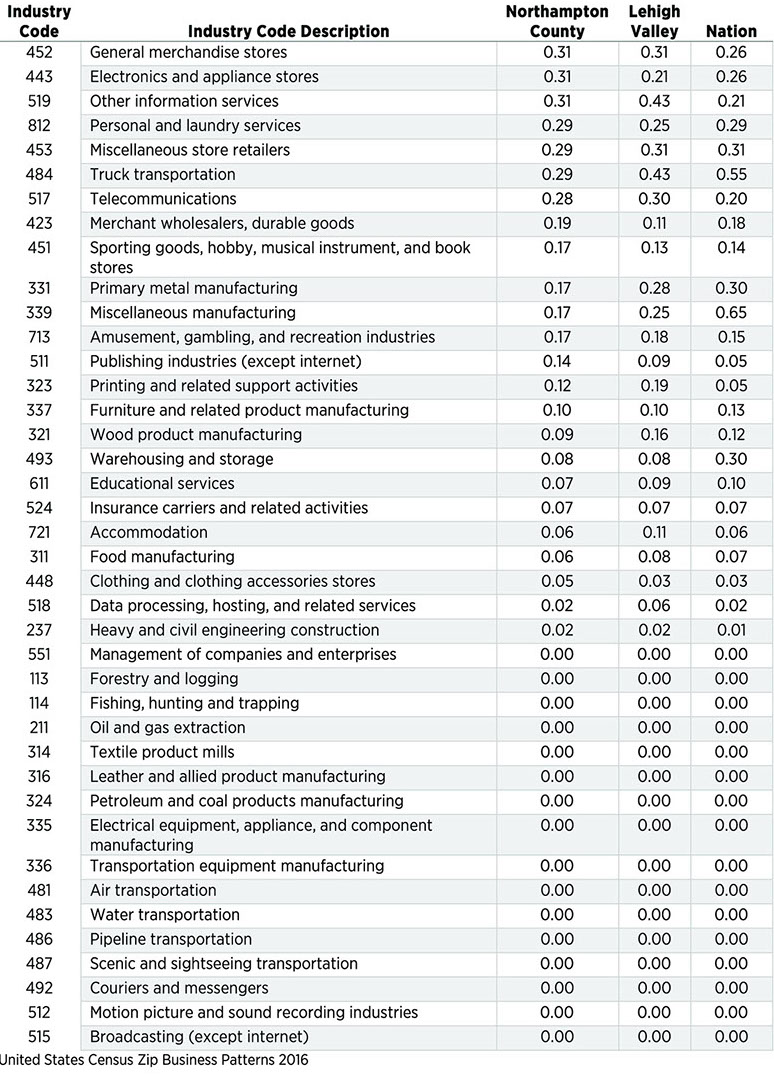 The Shift-Share Analysis examines the job growth of industries in a given region over a ten-year time period and helps to identify how much of that growth is attributable to local competitive advantages versus national employment trends. In this analysis, industry employment changes within the Slate Belt region are compared to industry employment changes at the national level from 2007 to 2016, using data from the U.S. Census.

The Shift-Share Analysis is comprised of two main contributing indicators:

The current-day employment in a given industry if, over the ten-year time period, local industries grew at the same rate as the national industries. This captures two factors of national employment growth: the overall growth rate* and growth rate within specific industries**.

How much growth or loss is attributable to local conditions. Regional Shift explains how much of the employment change in a given industry is due to some unique competitive advantage that the region possesses, because the growth or loss cannot be explained by national trends. This is found by subtracting Expected Employment from current employment.

**This factor is also known as “Industry Mix”.

The Shift-Share Analysis indicates some industries that have had significant growth independent of the influence of national employment trends. The local Wholesale Trade industry nearly doubled its employment, with a 94% increase compared to only 2.45% nationally. The Transportation and Warehousing industry experienced significant growth as well, at nearly double the rate of growth compared to the national level. This industry has become a major employer within the Slate Belt, which is confirmed by a high location quotient.

However, the Slate Belt area has experienced a significant employment decrease in many industries over the last ten years. The Utilities, Professional and Technical Services, Management, Educational Services, Arts and Entertainment, and Retail sectors all had a significant loss of employees despite increases at the national level, indicating that local conditions played a large part in influencing the decline.

The Manufacturing industry also had a significant loss of employees locally, at a loss rate of three times the national loss and despite an overall increase of manufacturing jobs in the Lehigh Valley during the same time period. This shift away from manufacturing is significant because the sector is still a major employer within the region, representing a large number of jobs and being one of the Slate Belt’s few base industries. Further losses in the sector could have a significant impact on the local economy—especially without growth in other well-paying industries.

This shift in employment may be attributed to businesses leaving the Slate Belt and relocating elsewhere for improved network access or amenities for workers. The analysis indicates the likelihood that Slate Belt residents have shifted to commuting outside of the Slate Belt area for work, as employment rates and income levels have not fallen with the decline in industry or jobs in the Slate Belt.

Both the Location Quotient and Shift-Share analyses indicate that there are not enough jobs in the Slate Belt for the local population. These numbers fit with local perceptions that the region has become more of a bedroom community in recent years. By looking at commuting data, we can see that this sense is correct—most people within the Slate Belt are commuting to outside areas for work.

Within the Slate Belt, areas of local employment include Bangor Borough and Upper Mount Bethel Township, with a number of people also working in Plainfield Township, Wind Gap Borough and Washington Township.

A large number of Slate Belt residents commute to areas of the Lehigh Valley directly outside of the Slate Belt, including Forks and Palmer townships, with a large number of people commuting to Allentown, Bethlehem, Easton, and the suburban areas between them. 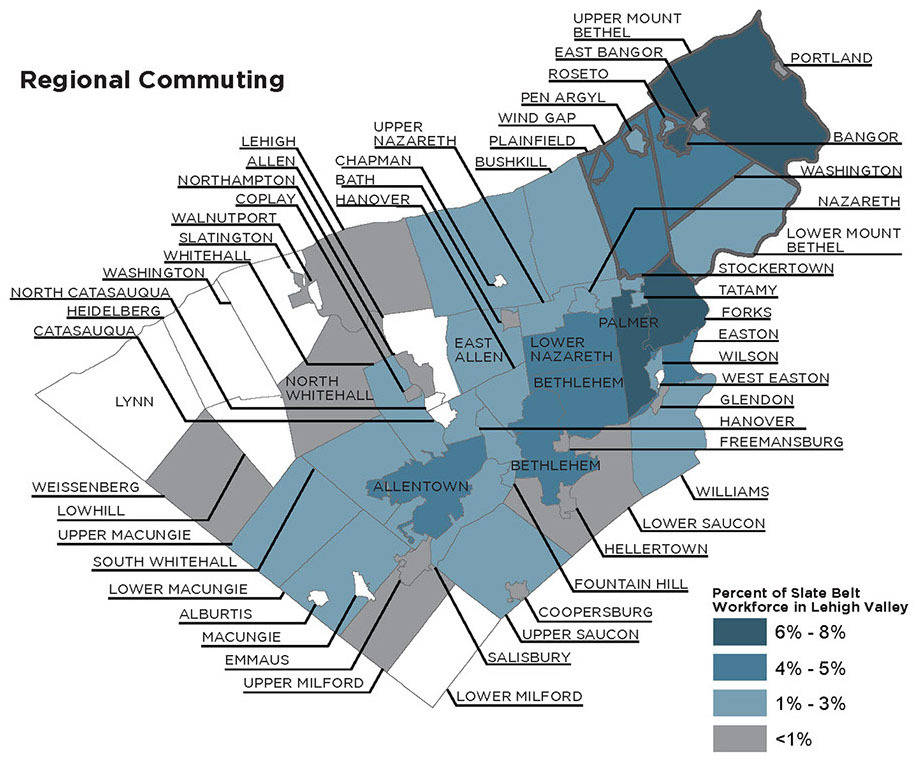 Slate Belt residents commute as far away as Washington, DC and New Haven, CT. While some residents do commute all the way to New York City, many more work in areas of northern New Jersey or commute to the Philadelphia metro area—with between 1% and 3% of the population working in Philadelphia itself.

Extreme commuters travel more than 90 minutes to work, long-distance commuters travel more than 50 miles, and mega commuters do both. While some of these commuters work from home or only travel to their office a few times a week, many Slate Belt residents make these trips daily. This pattern shows that the area has a unique and attractive quality of life that people are willing to commute long distances, but may also showcase the lack of local jobs or a diverse economy. Many commuters may choose a more local job if the local economy diversifies. 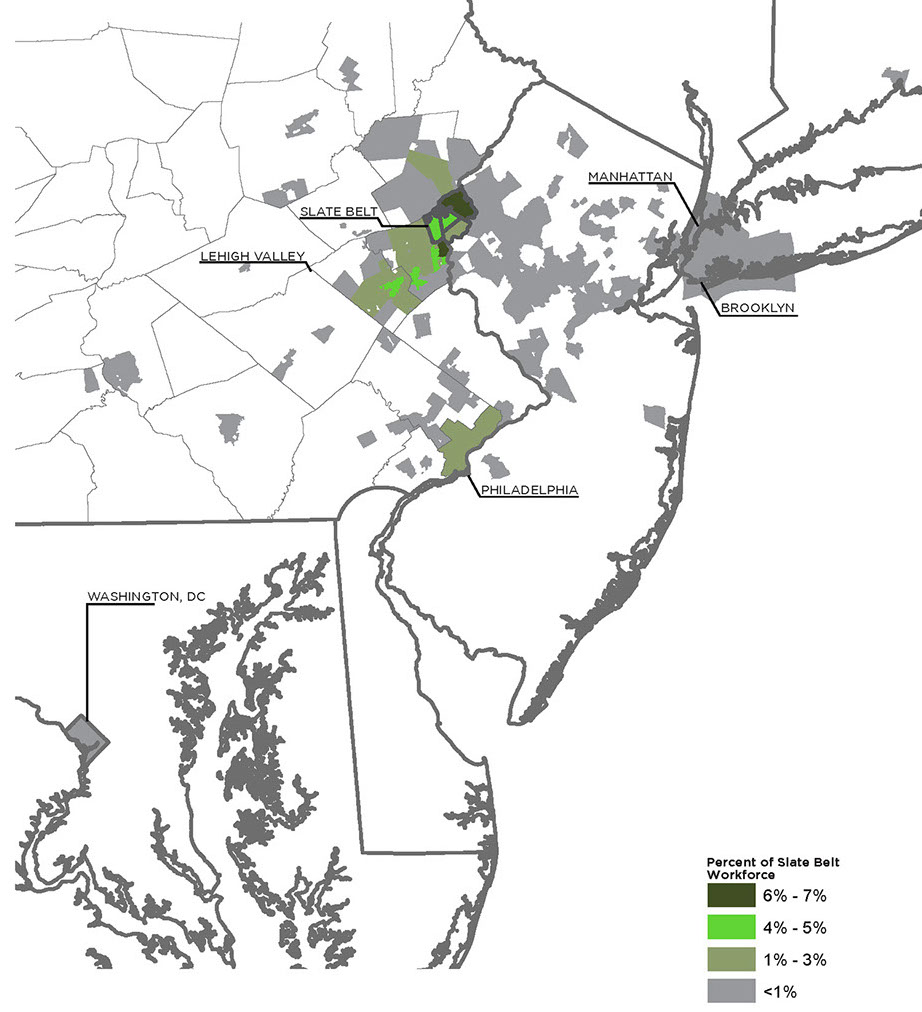 The trends indicated by the Shift-Share Analysis and Location Quotient fit with local perceptions that the historic industrial base of the Slate Belt has been in decline and that most people have to leave the region for work, shopping, higher education and professional services. Even as new businesses or facilities, like medical or urgent care clinics, have opened in the region, they are now more efficient and employ far fewer people than older businesses in the same industries. Other potential growth areas, such as tourism, food service and local retail, have not seen significant growth, while sectors like transportation and warehousing have been growing even before major logistic centers in the area have been completed.

These economic changes have led to a broad sense that the region has become more of a bedroom community that supplies workers to neighboring areas and concerns that the region could be adversely impacted by further growth in warehousing and freight—both of which can be seen through mapping commuting patterns and recent development trends.

Plan Slate Belt will need to take these economic trends into consideration when developing policies to shape its economic future. These policies will need to anticipate future changes to manufacturing, retail and desired quality of life to take advantage of the area’s assets and achieve the kind of balanced growth the region wants, while encouraging residents to work and spend money in their own community.