Community input is vital in creating a comprehensive plan. The data and analyses outlined in this document serve to support and verify the observations, opinions and concerns of the community. Synthesizing the data analyses and community-identified issues will result in logical goals that shape the policies and actions of Plan Slate Belt. Therefore, community engagement is a key component of the Plan. Residents, business owners and officials alike all hold a stake in the area, and the community engagement efforts were directed at obtaining a mix of input from various parties.

Meetings of local stakeholders were held to obtain early input from community members. The priorities identified during these meetings were circulated via an online survey to gain additional input before creating the draft goals. A local event, called the Slate Belt Bash, was also attended to get further input from Slate Belt residents.

Each session began with a brief presentation about the multi-municipal planning process and included current subdivision/land development data, demographics and transportation data specific to the Slate Belt region.

Following the presentation, the Lehigh Valley Planning Commission facilitated hour-long group discussions by asking the stakeholders a series of questions on topics meant to spur open and active discussion. Through this process, all stakeholders were engaged in the dialogue and provided insight on community concerns, which will help inform the direction of the multi-municipal plan. At the end of the hour, each group was asked to prioritize the concerns based on the discussion and present them to the larger group. Each attendee was provided three votes to select their priorities from the combined list.

From the three charrettes, the 25 priorities were identified and refined by combining topic areas to create a short list of ten topics. 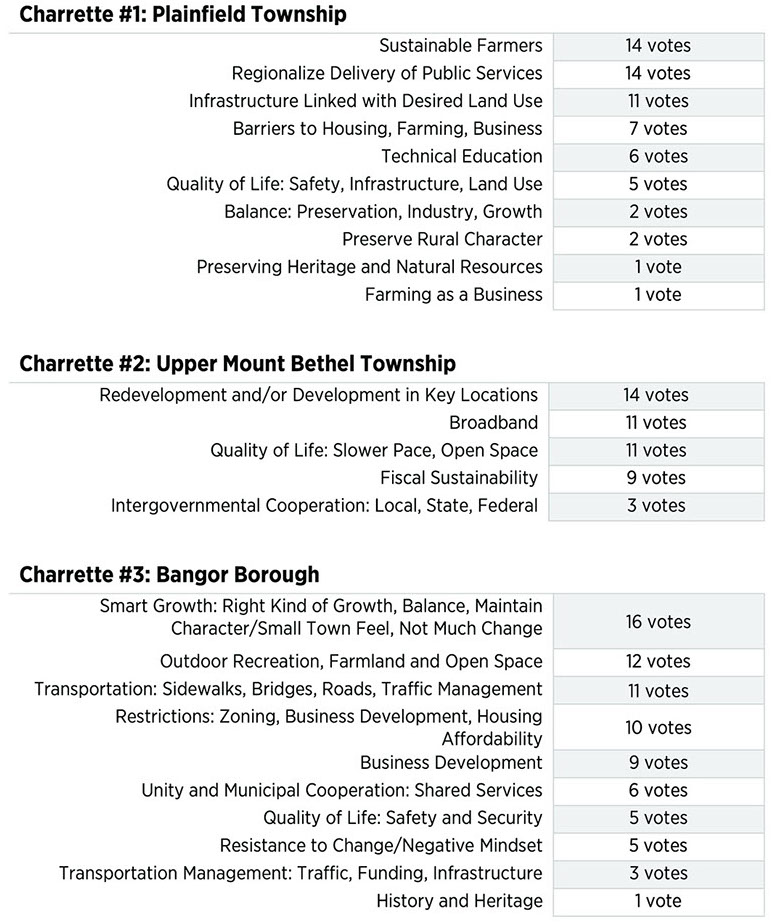 The refined list of priorities derived from the charrettes provided the basis for an online survey that was created for the Slate Belt Steering Committee members, identified stakeholders and charrette attendees. A link to the survey was emailed to approximately 160 people. The purpose for the survey was to further refine the list of ten priorities and identify any additional priorities that were not considered during the charrettes. Respondents were asked to rank each of the ten in order of priority. Additional priorities could be added and ranked as well. A 30-day response period was established, and the survey closed on August 4, 2019.

During the comment period, 62 people completed the survey. Rankings were determined by creating an average score for each priority and reordering the priorities from highest to lowest scoring. Average scores ranged from a high of 3.37 to a low of 6.74, indicating a relatively narrow spread of preference. The priorities were ranked based on their average score.

A number of unique comments were received. The topics mentioned most often in the comments included smart growth and shared services, while warehousing was mentioned only three times. The comments were similar to the top five priorities, so no new priorities were added to the original ten.

The survey results were presented to the Steering Committee at the August 7, 2019 meeting. During the discussion of the results, committee members expressed surprise that farming was ranked number five and transportation was number ten, since both had received a high number of votes at the charrettes. The top five priorities are the starting point to developing a vision and goals for the region.  When asked if anything was missing, the committee resoundingly indicated that transportation and infrastructure needed to be included in the top five as its own stand-alone priority, and the fourth ranked priority—ensuring public schools prepare students for the future job market—should be moved to number six.

5. Sustaining farming as a business and way of life.

The Slate Belt Bash was attended on September 29, 2019. The event was held at Weona Park in Pen Argyl Borough—a central location in the area. Community input was gathered through conversations and an interactive activity that collected comments on a large chalkboard cube. Two open ended comments were asked: what do you love most, and what concerns you? These comments were collected to help guide development of Plan Slate Belt.

Open space and quality of life were top things community members loved about the Slate Belt. The parks, the farmland, the wildlife and the architecture were all highly valued by participants. They also used a lot of positive words to describe the area, such as safe, beautiful and unique. Participants also loved the strong roots, small town vibe and kind people of the Slate Belt.

Economic conditions and community facilities were the top concerns highlighted through the activity. Many talked about the loss of mom and pop stores over the last several decades, as well as the decline in community activities and events. Participants were also concerned about the dump and potential loss of character due to future growth and development.

The Slate Belt is a dynamic area of the Lehigh Valley with a unique quality of life rooted in its history and landscape. The legacy of manufacturing and farming runs deep and defines the character of its historic boroughs and rural townships.

The 21st century is bringing new challenges to the area. Population is projected to grow in the region, and new attainable housing will be needed. The economy is shifting away from manufacturing, and more people are commuting for work. Development in key areas can improve finances but will increase wear and tear of critical infrastructure.

Plan Slate Belt will confront these and many other issues, thoughts and concerns of the community. To help guide the development of the plan, the municipalities have agreed to six draft goals. While their final wording may change, they lay out a vision for the area that is balanced, high-quality, resilient, strong and prepared.

1. A balance between growth and preservation.

2. A high regional quality of life.

4. A resilient transportation and infrastructure network.

6. A prepared student body and workforce.